New Bedroom for The Man of The House

It felt so wonderful to see those first posts go in!  Irish Dexter Cattle are known for their resilience during inclement weather.  However – very high winds and heavy rain are an issue with them.  And it’s been a real thorn in my side – watching our Herd Sire endure from under the 3 Cedars.

I find it so amazing – the amount of time it can take for a hired crew to build something like this – compared to how quickly and thoroughly this wonderful husband I’m married to is able to get it done.  Of course – he does get a little help from his ever-so-reliable ‘Go-fer Assistant’ – in between running down to the basement to deal with laundry – out to the paddock for daily halter training – feeding – barn cleaning – mowing – vacuuming inside the house – cooking – all the other chores.  And somebody has to do the grocery shopping – as well as all the other running around!

When you cut out all the other chores – and you calculate the actual time to the project – I’d say there has been approximately 15 hours put in – so far.  And that includes time for picking up all the lumber in Lenoir City – as well as ordering and picking up the metal roofing in Vonore.

Digging holes for setting in the posts is always a pain when the job isn’t suitable enough for bringing out the big gun on the tractor.  And for this project – Dwayne ran into a serious layer of pink marble.  But he conquered – with that hand-held post-hole digger! 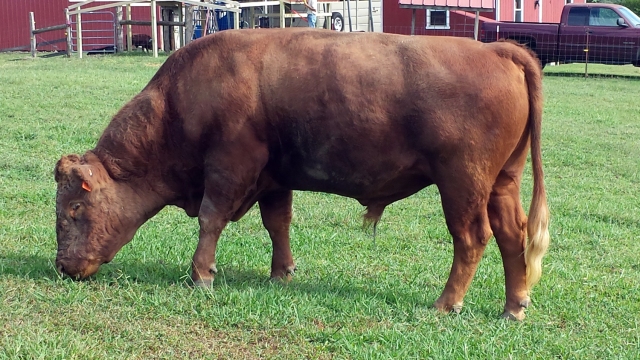 Along with a Bull in the vicinity.  (I’ll explain the filth in a second…)

Artist has been really well behaved.  I managed to preoccupy him with his feed bunker for a bit.  Naturally – having an entire paddock for space wasn’t enough for him.  He reached the point where an over-abundant urge erupted.  Strong desire muscled his attention to see what would happen if he shoved the bunker into the ladder – where Dwayne was standing upon – while operating an electric nail gun.

His revenge of choice when I took the bunker away from him – playing in the dirt.  He knows I complain about having a dirty face.

We have this ritual where he digs his head into his hay – just to have me scratch it off his face.  Lately – it’s been about scratching to loosen up all the DE from that curl on his face.  He loves for me to dump it all over him when the flies come around.  He just doesn’t like it trying to build a compost mound on his face!

We had to quit at Crunch Time last night.  We’ll get the last 2 sheets of metal on the roof this morning.  But Dwayne heads back for another round of his shift at work.  So – we’ll be ordering the metal for the walls – picking that up – along with more posts for a gate.

The hardest part will come when we get far enough along for pulling the fence and hotwire – and revamping the gate between Artist’s paddock and the little yard where we keep the weanlings.

Gonna be a trick.

But we have a plan!

Finishing this project will just have to wait for the next round of days off.  But Artist will be able to rest under 8′ x 18′ of the roof of his new bedroom if we get any heavy rain – in the meantime.

I think he’ll have enough space in there for a whole Harem!

A blog by Dr. Abhinav Majumder