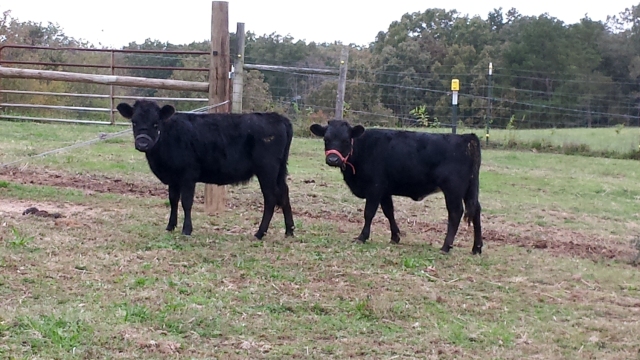 They arrived just last night.  And we are so tickled to have them come live with us!

Both girls are Irish Dexters.  Both have been tested and confirmed to be Positive for Chondro Dysplasia – a very well-known dwarfism trait that comes from the original gene pool of the breed.

We are so tickled to have them with us!  We stalled them up last night – because they arrived after dark.  We had already decided to put them with our youngest girl in our family – Anna.  We gave her free-will access to the barn alley through the night to keep them company and settled.

Anna – herself – is due to calve around January 31, 2015.  This will be her very first calf.  She’s alone in this age bracket and circumstances at this time.  Not wanting her to be alone – we felt it would be worth a try to put her with Beatrice and Helena.  Cattle are Herd Communal type animals.  We didn’t want her to be alone – despite her pregnancy.  But – we will be moving her into our little yard around the 3rd week of January – so we can keep a close watch on her.

Anna was so little – compared to the rest of the girls.  That is – until these 2 girls arrived.  I wanted to cry.  We were so shocked by how huge Anna looks now!  It reminded me of when I saw my oldest daughter, Lyndsey, first time after having my 2nd daughter, Britni.  All of a sudden – it was as if my baby girl disappeared and became this grown –up little girl.  I must have bawled for over an hour – just holding her in my arms and loving on her!

They grow so fast.

We were not expecting these 2 new girls to be as tiny as they are.  They are so adorable!  But when we consider breeding Artist with them – I just cringe.  My thought is – “If they don’t hurry up and do some more growing – I am NOT gonna have the guts to even try!”

But I’ve been told that they should put on some really good and proper growth by the time they’re ready for breeding.  I’m keeping my fingers crossed!  And at this time – we’re considering breeding them with Seamus – if he’s not sold by then!

We tried something new with the floor of our livestock trailer.  Dwayne painted Rust-O-leum’s Restore 10X slip resist deck paint on the floor boards.  This stuff is THICK.  But it has 2 different types of slip resistance in the paint that make it so worth the effort.  Sweeping out was a 2 minute job.  Nothing but dust and dried manure left – which came off with a spray nozzle on a hose – and a house broom.  But he still went back over it with a mild soap cleaner for disinfecting.

It has knocked his time cleaning the trailer down by 2 hours!!

All the way around – this has been a such a wonderful experience.  And we’re looking so forward to enjoying time with these new babies!

Italian Cooking with Locals in Tuscany