Most people raising cattle in the numbers over 50 may not relate to this post.  I would say it pertains to those of us with small places – raising less than 25 to 50 head of cattle on our property.  As the numbers grow – time and hands just don’t allow for such personable contact and care on a daily basis – unless you con your local kids participating in 4-H and FFA to hang out at your place every day.  😉

Again – everyone has their own set-up at their place.  And we all have our own ways with our animals.  Your way may not be my way.  My way may not be your way.  But neither makes the other any wrong way.  They’re all just different ways.

That said – I’m sharing what we have found to work best for us when Irish Dexter Cattle arrive at our place. 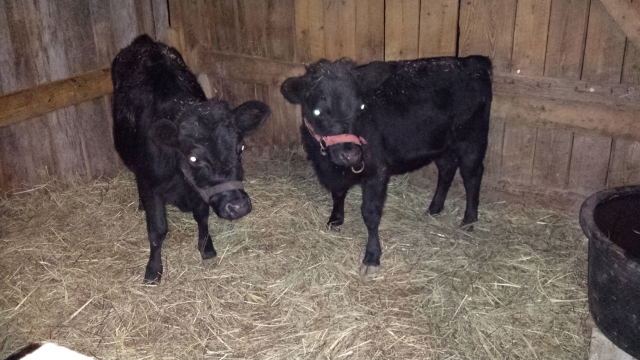 Our new animals go directly from the trailer to one of our barn stalls – especially when they arrive after darkness.  Being able to see in the dark has nothing to do with our choice.  We give them a quiet – confined space that provides them with a sense of security.  Not to minimize or sound mousy but – in its own way – doing so parallels with a sense of security in the same way as a security blanket for babies.  The difference it makes with calming them down is huge.  You have an animal more willing to listen and become familiar with you – by the time you go out to feed everybody in the morning.

I’ll use our most recent experience as an example for the protocol we try to frame out here.

We had already decided that Beatrice and Helena would share a paddock with Anna before we decided on which Heifers we were buying.  They did arrive after darkness fell.  And they were placed in the first stall of the barn – which was sanitized – bedded and stocked with fresh hay beforehand.  In order to help them become familiar with Anna from a safe place – we let Anna come stay inside the barn that first night.

Now – our barn stalls are divided by solid wood walls going up halfway.  Obviously – these 2 tiny Chondro Positive Princesses were not able to see over the wall to get a look at Anna.  But it was Anna giving us issues.

Anna whines.  She literally whines like we hear some toddlers whine… “Uh – Uh – Uh – Uh…” – chirped in that high pitch.  You know how kids do that when they want something?  They won’t speak.  But they’ll hold their hand out and do that whining?  That’s Anna.  She knew they were there.  But she couldn’t see them.  So we caved.  We left her stall door open and let her have the run of the alley.  This enabled her to go to their stall door.  And they were able to become familiar with each other that way.

Come next morning – we began trying various things to develop a routine that works for feeding all these varmints with efficiency in time.  We always have to change things up when newcomers arrive – some leave – babies are born.  It’s always something!

Anna was led back to her stall and secured for eating her ration.  Through the process – we let the new girls eat from a feeder bunker in the alley of the barn – with bottoms of the barn doors closed on both ends of the alley.  They were able to get used to eating with us moving around them – conditioning them for our activity around the barn.

They were allowed to visit the tack room – to learn where their feed is stored.  (Once they begin raiding the hay – we start keeping the door to the tack room closed!)  We were able to get them back inside the stall to get lead ropes on them – for daily walks around the paddock – before taking them to the far corner of the paddock to dish out their hay.  And then – we turned Anna out up by the barn – with her own dishing out of Hay.

Figuring out that last part helped us put a stop to Anna refusing to let Beatrice and Anna have any Hay at all.  Everybody stays at their own pile long enough to feel their gut to satisfaction.  At that point – Anna has no problem sharing whatever is left in the paddock.  She’s a cow – that acts like a pig.  “Ain’t nobody gittin’ any until I git mine!”

Beatrice and Helena’s first morning out in the paddock with Anna after arriving!

After a couple nights in the stall – we let the 2 new girls start sleeping out in the paddock at night with Anna.  We’d bring them all inside for their morning feedings.  Of course – it took some sneaky coaxing.  Mention food and Anna will walk off a cliff with you.  So – we just let her teach the girls what we wanted.  She comes romping into the barn – heads to her stall.  Little by little – Beatrice and Helena have reached a point where they now come in without her.  Anna eats her ration outside.  And when that happens – we’ve had to adjust dishing out hay to Anna first.  Once she’s got her head shoved into her hay – she’s forgotten about the whole world.  And we can take the girls to a spot of their own – where they’re peacefully left to enjoy their own!

We have looped all this into a daily routine.  There are so many things we use that barn for when it comes to conditioning our cattle for handling.  We’re able to tie the calves to the stall doors from out in the alley – training them to stand quietly while tied.  We’re able to train them for brushing and simple vet care from there – as well.

And it becomes a bonus when others are watching.  They see somebody being treated for allergies – deworming – etc., and getting cookies or sweet feed afterward.  Everybody ends up learning they get treats for letting us take care of something.  It calms everybody down – a bit more – whenever they realize we’re bringing them in for a turn.  And yes – there are those that won’t budge until you give them 1 cookie and show them you have more!

Flexibility – whatever works!  Try anything.  But never give up and do nothing.

Weather always plays into the scenario – demanding flexibility from us.  Of course.  To sum it up – I would say we begin this entire introduction based on a worst-case scenario.  It helps the animals learn that they can count on us having a plan when bad weather arises.  We don’t have to go after anyone.  They’re always at the door waiting on us.  Newcomers learn to take cues from the others much faster.  It makes dodging the Lightning much easier!

We con our cattle into loving that barn.  It enables us to get our hands on our animals at any urgent moment – or – for any health emergency.  Our animals have learned that we now have 3 great places for shelter during the nastiest weather.  They’ll compromise with the new shelter in Artist’s paddock.  And Anna is totally content with the outside shelter on the opposite side of where our Baler is parked.  But they all know that barn.  They all love that barn!

To this day – Artist will even squeeze himself into a barn stall ( LOL!! ) and turn around to watch us close the stall door – if we let him!  I have to go back – every once in a while – and look at the photos of him and Bruce sharing the stall when they first arrived.  Just blows my mind to see how much he’s grown!  I had to tease him a couple weeks ago – by leading April into the back paddock – long enough before running her back into the paddock she was staying in – just to get him into that paddock.  But I never have to ask twice to get him to go to that barn!

We’re not able to get a halter on Cora from out in the paddock.  But if you show her the sweet feed in that bucket – and you tell her to go to the barn….  Just get out of her way!  Once you have her in there – give her the sweet feed – you’re good.  If I hold the cookies and keep her chewing – Dwayne can get the Halter on.  But she won’t let him put a lead rope on her.  She’ll only let me do that.  And then it’s a total fight and coax with cookies – to get her to the chute.

April – waits at the paddock gate for me every morning and evening.  She lets me lead her past Aon and Seamus – through the alley of the barn – past Beatrice and Helena – right into her stall.  We have a routine.  We talk about big butts that we have in common.  We wait for doors to open.  We turn around and wait for doors to close. 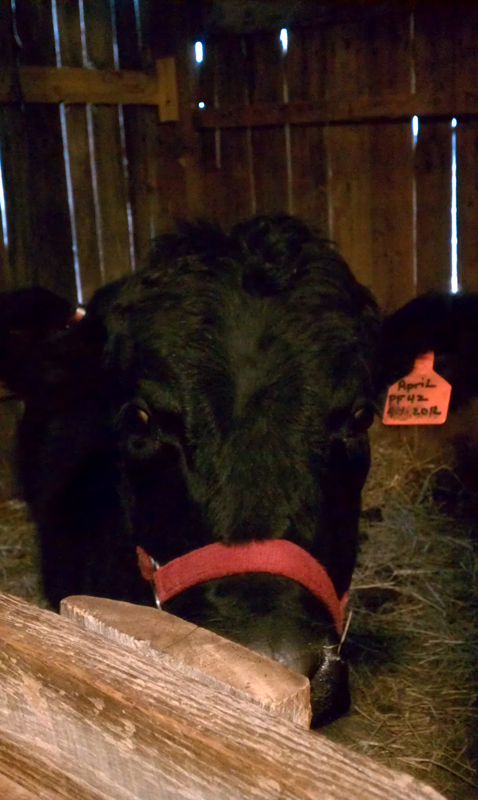 She’s a typical female. Trust me!

And when she’s finished eating and I ask her if she’s ready – she sticks her head over her stall door and turns her face for me to hook the clasp of her lead rope to the ring in her control halter – automatically.

Bottom line – when you step back and take in the big picture – The barn becomes the core tool that we use for handling these cattle – in so many ways – for so many reasons.  When all else fails – we are able to run our animals – from any paddock – to the inside of that barn – when we need to get a lead rope on them.  Even when we need to get them into the chute.  Even the ones with the ugliest temperament.

Barns are not built for only storing hay – equipment and feed.  They’re used for housing livestock.  And many folks house their cattle inside the barn at night during winters.  They build shelters when they have too many for a small barn.  But let your barn be your core tool for handling your animals with all the small stuff!  It can be a real pain getting animals into a chute.  They’ll be more tolerable of interacting with you – If they can trust that you’re not going to shove them into that squeeze chute or headgate every time you come near them!

Yeah…  I will gladly take on shoveling cow poop out of a barn twice daily – compared to changing all those dirty diapers – all day long – for over 20 years!  (And just think…  she’s got grandchildren coming around like popcorn, already!)

This entry was posted in Preparing For New Arrivals, What We've Learned and tagged Cattle, Cows, Dexter Cattle. Bookmark the permalink.

Italian Cooking with Locals in Tuscany

Adventure into Life With Jesus