God’s Will Leads Us With Surprises

Shortly after my last posting – we had a serious Winter Ice Storm that came through to rattle everyone.  I was so close to surviving that one.  Only days away from the warmer temps arriving with sunshine.  I’d finished up with feeding in all the paddocks.  Only 2 feed buckets to put away in the tack room.  I get to the barn door – and down I go.

I still don’t remember much.  But I ended up trashing the entire left side of my body – which is a really bad thing when there are only 2 people in this picture.  We’re both left-handed.  And half the workforce was taken out.  I sprained my left wrist – which scared the fool out of me – worrying about damage after the Carpal Tunnel Surgery.  I tore the Rotator Cuff in my left shoulder.  And the impact set in serious inflammation through my spine and legs – no thanks to the injuries I have in my spine and hips.

I had x-rays.  And then I had to go for an MRI.  Next came a visit to the Orthopedic Surgeon.  I was shooting for no surgery…”Please!?!”  Compromise came after being ganged up on by 2 men – the doctor and Dwayne.  And I survived a Cortisone Injection into my shoulder joint.  I’m going through Physical Therapy twice a week now.  And the Therapist tells me there’s an issue with a nerve in my left arm.  I’m praying we get that resolved before I go back to see the Ortho Surgeon in May.

In the meantime – April had her calf on her due date of April 14, 2015 – at 3:58pm.  I was already having mixed feelings – almost wishing for another bull calf.  Her aggressive bullish behaviors began kicking in as soon as she went into hard labor.  I had already decided last year.  I would pull the calf from her 3 days after birth – giving the calf time to gain the colostrum.

Ever since last year – I’ve been telling Dwayne – “If we can just get a Heifer out of her.”  We’d take the Heifer and try bottle feeding to see if time works in our favor with saving the Heifer from becoming just like April.”

During the whole time April was in labor – My head was spinning – coming up with Plans B, C, D… anything that might work!!  The brain was already working around all the ‘what ifs’ – way before she dropped that calf – getting settled for the ‘what is’ to show up.  And there’s one reason why my head works this way.  I submit to God’s Will.

We’ve only had bull calves born on our property since the first one that came in 2013.  I had to go back inside the house and get a flashlight.  The calf was jet black. 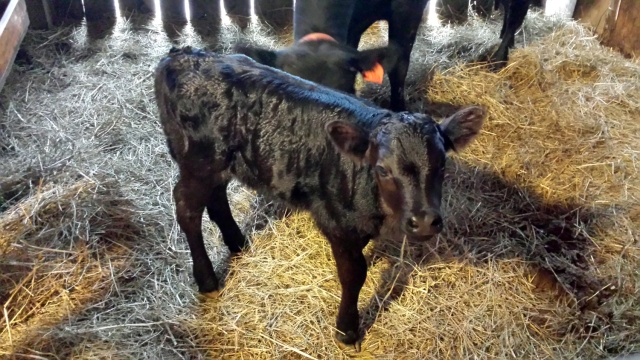 Artist and April produce the very first Heifer at our place! Photo taken 4-17-2015.

She’s a tiny little thing!  Her little head can fit through the slats on the stall door – up to her temples!

There were 3 things different that I noticed.  The calf stood up and I noticed how the back-end looked different.  The backside reminded me of that bulge that hangs out of the cows when they’re laying down – days before they calve.  It protruded out further than I’d seen on the other calves.

When the calf turned sideways to me – I only saw 1 little mound hanging from its belly – where the naval cord hung down.  There was nothing else there.  And then she flicked her tail.  I caught sight of a little tuft of hair hanging out just under her tail.  I knew about little girls being born in other species – even humans – where the vulva is swollen at birth and shrinks down to normal shortly afterward.

When she turned around with her backside to me – legs were too close together – definitely nothing hanging down.  And just as I said, “It’s a Girl,” – she starting peeing!

April’s demeanor had more than doubled what we were challenged with last year.   It was 10pm at night – and took 3 of us hanging in there with one hell of a fight – to get April out of that stall so we could give vaccines to that baby girl on time.  It – literally – took climbing all over that barn to get her ugly self out of that stall.

Prodding through the wall from outside with a show stick – while I’m rattling a shovel handle through the holes on cattle panel.  Having to separate her from the calf in the alley of the barn – Me keeping her attention from Cora’s stall – while Dwayne snatched the calf back into the alley area of her stall.  Her going crazy enough to run out of the barn and around to the side of the barn – giving that moment for Ronie to sneak in through the gate of the little yard and kick the barn door shut.

Getting a break while we gave the calf her meds.  Settling for laying a thick layer of fresh hay down – dropping April’s evening ration into the mounted feed bowl in her stall.

And then we had to get her back inside the stall.  Easy peasy – right?  Not when the calf comes waltzing out into the alley.

I managed to get the gate to the divider in the alley shut – confining April and her calf in the alley area in front of her stall.  The guys climbed the hay elevator to get up in the hay loft.  Couldn’t reach April.  I remembered the cane poles for Crappie fishing in the basement of the house.  Dwayne went for those and came back.  Nobody budging.  Baby laid down.

I knew April had to be hungry by then.  I went for the cookies.  “Ape – you want cookies?”  I started reaching through the cattle panel of the wall and tossing those into the feed bowl – knowing she could hear them land.  “Aren’t you hungry?  Daddy put your nummy-nums in your bowl.”

I got what I was looking for.  The ears perked forward.  The wrinkles on the forehead.  Licking her chops.  I kept at it – pointing to her feed bowl – throwing another cookie now and then.  Dwayne’s spanking her with the cane pole from up in the hay loft – while he’s laying over cross-timbers  and holding on to a beam with his free arm.  She starts trying to make the calf stand up.  Dwayne starts gently poking at the calf.  April gives up and walks into the stall and starts eating.

Finally – The calf stands up.  I start telling April to call her into the bedroom.  The calf finally makes it in there while Dwayne prods her with that cane pole and me coaxing April to call the calf.  Just as we get the calf to step inside the stall – Ronie sneaks down the ladder in the alley for the hay loft and kicks the stall door shut.  By then – I’m back in Cora’s stall where I manage to slide the latch closed.

Cora is about ready to drop her calf.  I can’t risk putting April out in the paddock with Anna, Cora and their calves.  She has shown me enough to know that we can expect her bullish behavior to double when she gets around those calves.  She was terrible last year – trying to claim Cora’s calf – charging anyone that came into that paddock – no matter how far away they were all grazing.  And we have to pass through that paddock to get to Artist.

I have to think about the safety of all the other cattle.  God has known what I’ve been saying – all along.  This Heifer’s birth at this time – was God speaking to us.  This is how God has always spoken to me.

We have an appointment for taking April to our Butcher this coming week.  We do not sell problems to folks.  We correct problems – one way or another – before selling anything to anyone.  And we have a coworker that will be taking half of April home – after she’s become much gentler in her demeanor.  😉

I’ll bottle feed – if we can’t get Cora to take on fostering.  We’re hoping Cora will drop her calf a bit early, give or take a day around taking April to slaughter.  She seems very interested in the calf.  And she produces a milk supply that can handle 2 calves.

I have to see if I can avoid those negative behaviors of April’s being imprinted and embedded in the calf.  If those behaviors show up after the efforts I’m planning – it will be considered negative traits in genetics that April has taken and passed on to this calf.  And we’ll be putting this calf in the freezer when the proper time comes.

In the meantime – we are facing the challenge of all this rain – the mud – the lack of grass because of the mud.  We’re setting up temporary hotwire fencing for our cattle during the day – so they can graze on grass.  We’re waiting on Cora’s calf – so we can get her back into the paddock with Anna and the Littles.  Pretty soon – we’ll get all the girls on the same clock set for breeding at the same time.

We’ve had quite a bit going on around here since my last posting.  The challenges just continue coming along.  We keep putting one foot in front of the other.  And we’ll continue doing so.  As long as we can look down and see toes in front of us – with something different underneath – nothing will defeat us.

The one thing I need this year mostly – no surgery.

2 Responses to God’s Will Leads Us With Surprises

A Journey of Life, Home, and Italy

A blog by Dr. Abhinav Majumder